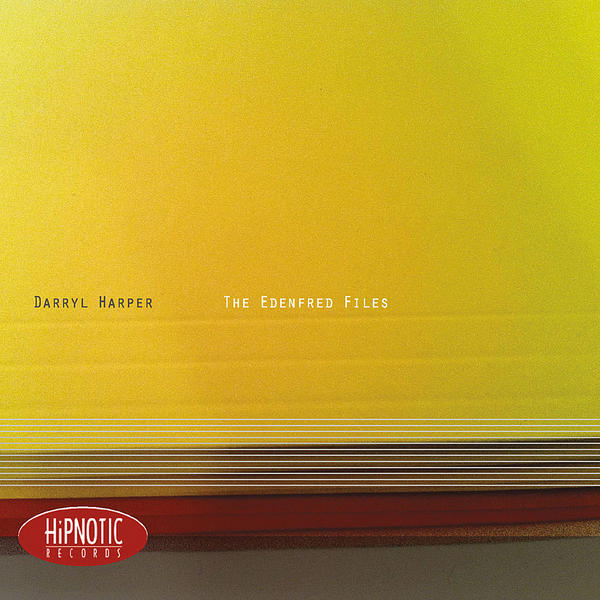 The Edenfred Files almost sounds like something out of spy fiction, but its meaning is straightforward. In the summer of 2009, clarinetist Darryl Harper spent two weeks in an artist residency program called Edenfred, in Madison, Wisconsin. He used the time to work every day with the two contrasting lineups featured on this CD. What we’re hearing, then, is a précis of the creative adventure that Edenfred represented for all involved.

“While we were at Edenfred,” Harper recounts, “we met a woman who specialized in arts audiences and quantitative analysis. We met a poet, a children’s book author, a visual artist. We had a salon where everyone shared their work, and that was really beautiful — very inspiring to be around people working in these other disciplines.”

Harper spent week one at Edenfred with pianist Kevin Harris, honing a duo collaboration fruitful enough to have been given a band name: Into Something. The second week saw the arrival of bassist Matthew Parris and drummer Harry “Butch” Reed, Harper’s longtime partners in the Onus Trio. On The Edenfred Files Harper brings together both aesthetic worlds — duo with fleshed-out piano harmony, trio with no chords — and offers a fresh, eloquent statement on the challenges and straight-up fun of ensemble playing.

Can a duo be called an ensemble? Absolutely. Harper recalls: “When I was in Boston between 2004 and 2006, one of the first courses I took at New England Conservatory was called ‘Duo Ensemble’ and it was taught by [saxophonist] Allan Chase. There were eight of us. We did all this heavy listening to duo recordings, and each week we had to prepare pieces along different parameters. He would mix us up, so we’d be with a different partner every week. It had a big impact on me, and it got me thinking that I’d like to develop that kind of playing, with that kind of transparency and exposure. I happened to meet Kevin right around that same time and I thought we had a great chemistry.”

The clarinet-bass-drums trio format, certainly not an overused one in modern jazz, is something Harper first documented on the 2004 HiPNOTIC release Triphony. Featuring Parrish and Reed and released under the name The Onus, this album marked the debut of a wonderfully spare and agile unit, playing compositions by Harper, Andy Jaffe and Stevie Wonder, plus “Limehouse Blues” and five pieces credited to the full trio. In 2009 came Harper’s Stories in Real Time, merging the Harper-Parrish-Reed trio with another initiative called the C3 Project (three clarinets, bass clarinet, piano, voice and rhythm). Harper was broadening his ensemble concept, focusing on ambitious works by guest composers Ken Schaphorst, Roland Davis, Sunggone Hwang and others.

On The Edenfred Files we hear Harper paring it down again, embracing a simple blowing vibe that highlights the whole band on “Jerry’s Blues,” a 24-bar waltz. The tune’s composer, Vicki Wiseblatt, was a fellow clarinetist and faculty member at George School in Pennsylvania in the mid-’90s. “We played a lot of classical stuff together,” Harper says, “but she had written this blues and showed it to me to ask for suggestions. I really loved it, and the trio’s been playing it ever since.”

One standout feature on the trio cuts is Parrish’s ability to move in and out of melodic roles, doubling lines with the clarinet and yet never losing momentum or depth of tone. “Both Matthew and Butch have a wonderful sense of orchestration,” Harper says, “maximizing all the potential of the trio to get the biggest sound, or the most intimate sound, going back and forth.”

The trio deals with blues of a very different nature on Julius Hemphill’s “Kansas City Line” — originally a solo alto sax performance on the 1977 Hemphill recording Blue Boyé. “As I made clear on Stories in Real Time,” Harper says, “I was heavily influenced by the World Saxophone Quartet, so I’ve listened to Hemphill a lot. I just love the immediacy of his playing and the sincerity of it. You can’t mistake it — it’s Julius Hemphill. We think of Monk along the same lines, with originality being such a big part of his identity.”

Of this particular “Kansas City Line” rendition, Harper adds: “We just had a ball with the idea of the 10-bar blues. Part of what we do is think, ‘Well, what would it be if it were a 12-bar blues?’ Let’s extend this measure and this measure to see what that feels like. When we get to the trading section, you can’t trade fours, so we’re trading fives essentially. It means that we’re crossing over the bar line all the time and having to keep track of where everything is. It’s a really interesting alternative to what you would normally do on a blues.”

Parrish’s “Sirens Calling” was written for a commission that premiered (also in Madison) at an opening for an exhibit on “African diaspora water spirits,” Harper explains. “Matthew had all these images in mind: in the slow section he was thinking about the slave ship making the Middle Passage, with the creaking, the waves, things like that. There’s an earlier section inspired by the bugs that hop on the surface of the water. Everything had a water theme, all the way down to the musical sources Matthew drew from.”

Butch Reed’s “Edenfred,” the third blues of the set, was named after the fact, in honor of the residency experience itself. According to Harper, “Butch insisted on teaching it to us by ear. He didn’t want it written down for a long time. So he would sit there, in the old Art Blakey way, and he would sing to us and we had to play it back to him. By the time we wrote it down we’d been playing it for a little while, and that really changed our relationship to the piece.”

Citing Coltrane Plays the Blues, John Coltrane’s 1960 landmark, Harper comments: “‘Edenfred’ reminded me of that album, but all in one tune.” The implied modal harmony and driving feel almost seem to evoke a phantom McCoy Tyner sitting in on the take, inaudible to us listeners, perhaps present to the trio. (What’s more, if you refer back to the soprano-bass-drums lineup that Coltrane used on “Blues to Bechet,” you can clearly discern a sonic precedent for the Onus Trio.)

Making the Coltrane influence explicit, Kevin Harris closes The Edenfred Files with a beautifully harmonized solo piano reading of “After the Rain.” But before that, the Into Something duo shines on two Harper compositions, “Spindleshanks” and “Walking with Old Souls.” Of the former, Harper says: “Kevin and I are playing the exact same line but it’s offset by a half a measure. We used that idea to build the improvisation and get that contrapuntal feeling. Kevin and I are always surprising each other. It feels like throwing a football around — that energy, that playfulness, is something we’re very deliberate about.”

The rubato transition toward the end of “Spindleshanks” was wholly spontaneous, dovetailing nicely with the quieter drone-like vibe of “Walking with Old Souls.” “In college I studied Carnatic [South Indian classical] music,” Harper says, “and there’s an introductory part of a typical performance called alapana. I was thinking of that sensibility and feeling for ‘Old Souls.’ The clarinet line is fixed and notated but the piano is improvising. My only influence on the clarinet is how slowly I deliver the line, how quickly I get through it or how I move from one phrase to the next.”

Ending the album with solo piano and no clarinet might seem ironic. Part of it was simply to keep the textures fresh and different, but given the thoroughly collaborative nature of the project, Harper’s choice to yield the floor to Harris makes sense. One key element of duo playing, Harper maintains, is a willingness to follow, or sometimes get out of the way. “It’s like when comedians improvise with each other,” he muses. “It’s all about validating your partner, so no matter what they do, you say ‘Yes’ and you keep going.”