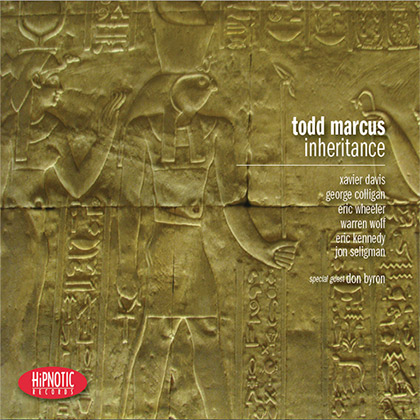 Excerpt from the CD liner notes by David R. Adler:

Todd Marcus, a son of rough-and-tumble Baltimore, is a bass clarinet specialist and thus a nonconformist from the outset. In Pursuit of the 9th Man, his 2006 debut release for nonet, proved that he’s not only a gifted composer/arranger, but also a fiery soloist on an instrument best described as an underdog. “That’s been my quest, to take the instrument and try to chart some new territory,” Marcus says, noting the bass clarinet’s more usual role as an orchestral color, a “softer double or an avant-garde free horn.”

With Inheritance, Todd’s sophomore effort, we hear the bass clarinet swing and burn in a modern mainstream quartet setting. The agility and consistency of Todd’s line playing catches one’s attention: “Because of the horn’s challenges of volume and projection,” he says, “you don’t hear folks taking it at higher tempos, playing louder and with more power and force. That’s one of the reasons I wanted to lead off with ‘The Adventures of Kang and Kodos,’ to demonstrate what I’ve been able to do on the instrument.”

This opening C minor blues romp, Marcus explains, takes its title from two recurring characters on The Simpsons, “these green aliens with a glass dome over their single eyeball.” The tune summons a rousing performance from George Colligan on piano, Eric Wheeler on bass and Warren Wolf, better known as a monster vibraphonist, on drums. But this is just one of two quartet lineups Marcus employs on Inheritance; the other features Wheeler again with pianist Xavier Davis and drummer Eric Kennedy.

“There are different qualities in my music,” Marcus explains. “On the one hand, with bass clarinet there’s definitely an opportunity to explore that softer side, and compositionally that’s a big part of what I like to do. On the flip side, a lot of my passion is for the more driving, high-energy kind of material. The quartet with Xavier does a great job probing the more introspective stuff. The one with Warren and George really has that bounce and beautiful energy to it. It’s great as a horn player to have that fullness just surround you, and you can dig in.”

Another unique thing about Todd Marcus: he’s half-Egyptian on his father’s side, with a number of relatives still based in Cairo and Alexandria. The subtle Middle Eastern tinges in “Herod,” “Wahsouli” and “Blues for Tahrir” are no accident. Todd has investigated Middle Eastern music and his dual heritage in a variety of ways, and he’s paid close attention to the tumultuous events of the Arab Spring and the post-Mubarak era in his father’s homeland. With “Herod” he alludes to biblical times, opening with a stormy rubato introduction and seguing to a beautifully orchestrated feature for himself alongside clarinet great and special guest Don Byron.

“There were a couple of tunes that called for a second voice, and I thought it’d be meaningful for me to have someone in the clarinet family,” says Marcus. “I’ve known Don over the years and he’s been such an inspiration for me, a major example of someone using the clarinet in modern contexts. We’ve done a few dates since the recording and we have some more coming up. It’s been special and it’s meant a lot to me.” The fact that both George Colligan and Xavier Davis have worked with Byron at various times made the match all the more comfortable. Byron returns for the extraordinary “Solstice,” which starts as a simple ballad and grows into a passionate multi-section epic.

It was In Pursuit of the 9th Man that made people sit up and take notice of Marcus — he was quickly tapped as a core arranger and composer for Orrin Evans’s incendiary Captain Black Big Band — and it’s Inheritance that will propel him to the next stages of his creative journey. But it isn’t only music that informs Marcus’s artistry and worldview. He’s devoted years to local activism as head of the nonprofit organization Newborn Holistic Ministries. “We’re focused on poverty-related issues here in our Baltimore community,” Todd says. “We’re coming up on 12 years of a program for women overcoming homelessness and addiction, and about four years ago we added a program called Jubilee Arts, which offers an alternative to drugs and violence with arts classes and other cultural activities. We’ve also started renovating vacant lots and buildings, creating green spaces with fountains and murals and trees.”

Far from distracting him from his music, Todd’s community activism only enhances his ability to connect, to see the bigger picture. “I don’t want to downplay the fact that music is a powerful force, something that can transcend a lot of the challenges that mankind creates for itself,” he says. “But the two halves of my life are equally important.” That, too, is part of one’s “inheritance” — the awareness that others have come before us, that others will follow after us, and that what we do in the present makes a difference. Music that’s informed by these human truths is bound to sound more multi-dimensional and alive, and it’s certainly borne out when Todd takes to the studio and stage. Stay tuned.