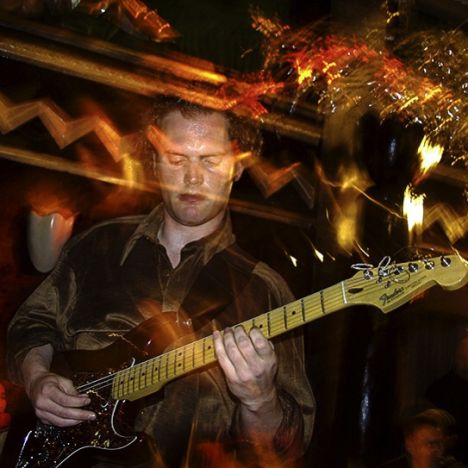 Born in Toledo, OH, the late guitarist, composer and arranger Jeff Ray attended Miami (Ohio) University and graduated from The Ohio State University before pursuing a masters in jazz peformance at Rutgers University, where he studied with Ralph Bowen, Kenny Barron and the late Ted Dunbar. His exposure to jazz began at home; legendary jazz vocalist, vocalese innovator and fellow Toledoan Jon Hendricks was a family friend.

Jeff’s association with HiPNOTIC Records began before the label’s inception when, in 1996, he joined clarinetist Darryl Harper in the frontline of The Onus quintet. Jeff appeared on the band’s eponymous debut CD and contributed two original compositions to their second CD, Reoccurring Dream, including its title track. Released in 2001, Reoccurring Dream was the first recording to wear the HiPNOTIC logo and be distributed by the label.

By this time, Jeff had moved to New York and was residing in Harlem. Jeff’s life experience and intense musical exposure in Harlem heavily informed the content of his own debut CD, The Walkup (HR-10002), recorded in July 2002 and released on HiPNOTIC in early 2003. Named for the blocks-long stretch of pavement that Jeff and his musical cohorts frequently traversed to get from his apartment at 580 St. Nicholas Avenue to St. Nick’s Pub on Sugar Hill, The Walkup consists mainly of original compositions that reflect the wide range of Jeff’s influences — from straight-ahead jazz to rock ‘n’ roll, reggae, funk, soul, R&B, hip hop and house music. Notably, one of just two covers on The Walkup is an original arrangement of the Roy Ayers classic “Everybody Loves the Sunshine,” providing an emphatic jazz-funk point of reference; the other is an epic reworking of the house anthem “Hot Music” that features a James Brown-inspired interlude.

Whereas Jeff’s work with The Onus featured him on hollow body jazz guitar, swinging and comping in a mainly acoustic context, The Walkup features Jeff on Stratocaster, backed by Rhodes and B3 organ, electric bass, drums and percussion, wailing and wah-wah’ing over backbeats and playing propulsive rhythm guitar. The constant in this highly diverse music is Jeff’s unfailing flair for lyricism, colorful harmony and rhythmic feel — qualities that brought an uncommon warmth to everything he played. That warmth pervades the third and last CD by the The Onus quintet, Y’All Got It – Music from The Wiz by Charlie Smalls, recorded in 2004.

That same year, Jeff relocated west, initially with Harlem bandmates, and worked hard to establish himself over the next decade as one of the most respected, versatile and highly sought-after guitarists in talent-rich Las Vegas. A full-time member of the Jersey Boys — Las Vegas ensemble since 2011, Jeff played in numerous Vegas stage shows (both onstage and in the orchestra pit), shared the stage with high-profile musical acts such as Boys II Men and casino/cover bands such as Miami 7 and The Jone$, led jazz ensembles and jam sessions around town, taught jazz guitar at U.N.L.V., and played and recorded as a member of the neo-soul/rock/hip hop-melding band Penthouse Suite, to whose repertoire he helped contribute several songs as composer or co-author.

Throughout his life, Jeff drew artisic inspiration from many sources, including literature, painting and drawing, photography and modern dance. His reverence for artistic beauty in all of its manifestations finds reflection in the recorded music he leaves behind.